How long have you been involved in camp? How did you get involved?

I got involved after a friend from CU Boulder, where I was studying, encouraged me to volunteer as a camp counselor. At the time, I didn’t know anything about adoption and didn’t know many adoptees, so I wasn’t sure what to expect. Six camp seasons later and I still look forward to staying involved with HCAF as a camp counselor! I’ve been a counselor at Southeast Asian/Pacific Islander Heritage Camp, the two Chinese Heritage Camps, and Domestic Adoption Camp. 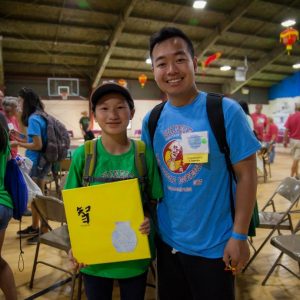 What do you think is most valuable about camp?

I’d say that the community is the most valuable aspect of camp. Even though these camps are only 4 days out of the year, I like to think that building towards this community — where adoption, family, and having fun are common grounds — is important to parents, campers, and volunteers alike. It’s amazing to see all of these families working together to create this environment year after year.

What’s one of your favorite memories or something you look forward to each year?

I look forward to seeing returning campers every year! There never seems to be a shortage of surprises from them, like new hobbies, new skills, or new life goals (and even new words!). Being able to witness their gradual self-discovery as they get older is inspiring and reminds me to also continue growing. It may be an overstatement to say that I’m vicariously parenting through being a camp counselor, but it does feel that way sometimes.

What are you focused on currently?

I’m partly focused on work right now, having started a job at Lockheed Martin earlier this year. I’m stumbling through the lessons of homeownership and am in the midst of a waning war with my lawn weeds. I’ve been curious about homebrewing cider, but don’t know where to start.