Pam and her husband Dan are the adoptive parents of two children, a daughter who was born in Korea in 1986 and a son who was born in India in 1989. Her children catapulted Pam into life and career interests she never imagined. Pam’s position as Executive Director has evolved over the past 20 years as she was a volunteer Executive Director for the first 7 years, then the only part-​time paid staff person, then a full-​time paid position, and finally to overseeing with the Board of Directors the addition of two more part-​time paid staff. Pam and Heritage Camps for Adoptive Families have been the recipient of the Minoru Yasui Volunteer Service Award, Asian Education Advisory Council Community Service Award, Channel 7 Everyday Hero, Asian Pacific Bar Association Minoru Yasui Community Award, and the Korean American Coalition of the U.S., Bridge Builder Award Pam has been appointed to the Denver Asian Pacific American Commission, and is on the capital campaign committee of the Asian Pacific Development Center. This “labor of love” at Heritage Camps for Adoptive Families has truly become a life’s work for Pam, one that never would have happened without her own wonderful children. 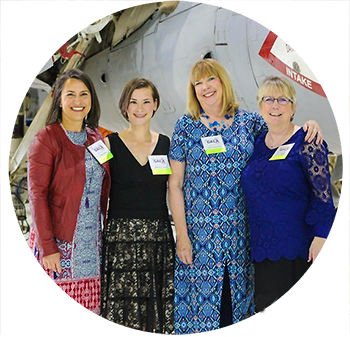 Director of Operations and Programming

Karen is the adoptive parent of two children, a son born in Vietnam, and a daughter born in Korea. They are both attending college. She and her husband, Mike, and their children have been attending heritage camps for 20 years. She was the Vietnamese Heritage Camp volunteer director for 4 years. In her role as staff at HCAF, Karen manages and controls the Heritage Camp inventory, database system,  and supports the volunteer coordinators in their camp preparations. Karen is a true believer in the Heritage Camp experience for her own children, and for so many others.

Director of Information and Community Relations

Lisa is originally from Chicago but has called Colorado home since 1995. As the mother of two biological daughters and a son born in Guatemala, Lisa knows first-hand the value of connections forged through the camp experience. She and her husband have been attending Latin American Heritage Camp since 2009 during which Lisa served as a coordinator, director for 4 years and an HCAF board member for 2 years. In her position as Director of Information and Community Relations, Lisa supports camp coordinators, directors, counselors and cultural community members organize and facilitate camp planning meetings and timelines as well as execute camp themes, review workshops/activities, maintain the integrity and spirit of cultural authenticity and family participation. In her spare time, Lisa enjoys making heritage camp T-shirt quilts and dreaming of exotic travel destinations.